Mr. Tilton, a novice sport diver who only recently took up the sport, was on a boat dive near the Coronado Islands. Divemaster Brock Meron says the day started like any other, but then took a turn for the bizarre:

"We were near the reef, and I saw Mr. Tilton removing the hood of his wet suit. Normally, an amateur diver has too much trouble with this maneuver underwater, since it means taking the mouthpiece with the air supply out of your mouth and letting it dangle behind you for a moment, finding it again, and placing it back in your mouth. He seemed like he was doing OK, so I just watched him. I saw him pick something up off the coral and tuck it inside the collar of his suit. The environment here is stable, but still pretty fragile. We frown on our customers removing anything from the dive site."

Mr. Meron swam to Mr. Tilton's side and, through sign language, Mr. Tilton claimed he had not picked anything up, so Mr. Meron simply stayed close to his customer to ensure the rest of the dive stayed safe and legal.

"A couple minutes later," continued Mr. Meron, "the guy started getting a little squirrely, you know? Really agitated. I signaled to my coworker that I was taking him to the surface and then gave Mr. Tilton the 'thumbs-up' sign which means 'head to the surface right now'. By the time he got his mask off and could talk to me all he was doing was yelling and screaming. We got him in the boat and called 911 on the way to shore."

Paramedics at the scene, veterans of dive injuries, described a situation they'd never seen before. EMT Jack Verner said it was "like his suit was stuck to him. We couldn't even get his hood off him. We had to give him some pain medication by injecting it into his thigh muscle right through his wetsuit. He was pretty freaked out. It was like his suit was welded to his body."

The ambulance took Mr. Tilton, now in less pain and a bit more calm, to the University of California Medical Center. Doctors treated Mr. Tilton in the Emergency Room and are keeping him for observation. Dr. Royce Throckton, a specialist in Dermatology described his condition as "Stable, but we're keeping a close eye on him. It seems to be some rare reaction between his skin, his wetsuit, and the toxin from the spines of a blowfish."

Officials at the Scripps Oceanographic Institute said the toxin in a blowfish spine is normally painful but severe reactions can be fatal. It appears Mr. Tilton is a very lucky man.

Though difficult to understand at times due to swelling in his face, Mr. Tilton was able to tell reporters: "The little guy just looked so cute, you know? I figured there would be enough water in my suit to keep him alive until I got back to the hotel and I could take him home. I have a nice salt water aquarium at home."

Mr. Tilton apparently suffered multiple small puncture wounds to his face and neck as a result of placing a small blowfish in his wetsuit and then experiencing first-hand the threatened fish's natural defense mechanism: blowing up to approximately twice to three times it's normal size.

Doctor's say they are unsure why Mr. Tilton's wetsuit began to degrade so rapidly. "His skin chemistry is a bit odd," stated Dr. Throckton, "It's a wonder he didn't react to wetsuits before. Add the skin's reaction to the toxins in the blowfish spines and it was a very touch-and-go moment for him, medically speaking. He's lucky to be alive, really." 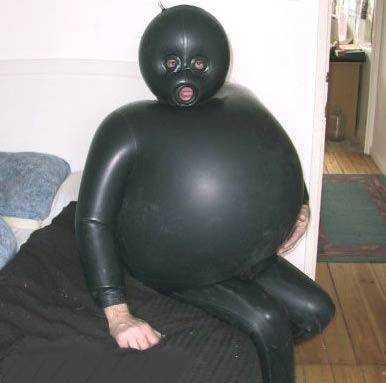 While his spirits are still good at this point, Mr. Tilton (pictured here in his hospital room) faces weeks of special treatements. The first priority, though, is getting him out of his wetsuit, which remains stuck to his skin. Doctors are currently attempting to pump air into his suit to keep the wetsuit away from his skin, while also giving him antibiotics and other medications through an intravenous line placed in his left foot -- the only part of his body which appears to be unaffected.

Adam Savage and Jamie Hyneman, Hosts of the popular Discovery Channel(TM) program "Myth Busters" were both unavailable for comment.

translated by Can Opener Boy at 16:16

lol! thanks for sharing.