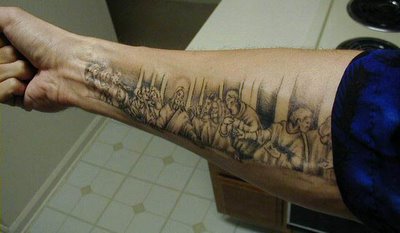 Recently, I posted an article asking what music you'd like to die by. While only a couple comments were posted, I did receive some feedback via eMail and in person that not only was this a weird question to ask, it was just plain weird to think about. Welcome to the world of Can Opener Boy questions. =O)

Here's another one. When you are dead and gone, how would you like people to remember you? And I'm not just talking about what you want on your tombstone, or what you hope people say about you in a eulogy. Those are important things to think about, but I'm going deeper and further than that.

More specifically: in what practical way would you like to be remembered? A hundred years from now, a thousand years from now; two thousand: if you could pick one thing for people to experience and remember you by, what would it be?

The other day a patient I had the honour of assisting sent me two long-stemmed yellow roses as a way of saying thank you. In the floral biz, a yellow rose means "friendship". It was nice of her to send me those, but you know what I took away from that in addition to the "thank you" she was expressing? I thought of my mom. When my mom died in May of 2002, I honored and commemorated her by getting a large yellow rose tattooed on my right calf. She was from Texas, you see. I did this on my own though. She didn't ask it of me. But I sometimes wonder as I look at my leg and remember my mom. What imagery would she have picked for herself?

The tattoo pictured above is not on my body. It is just a photo I found on the internet. But whoever that person is, they're unlikely to forget Leonardo DaVinci's painting of "The Last Supper".

I've been asked to introduce this aspect of our time together this morning. As I prepared, and in reading the bible accounts of that meal, it struck me that Jesus told His followers "As often as you do this, remember me."

What's the "this" He was referring to? When Jesus was nearing the culmination of His life here on earth, what was He choosing to be remembered by?

He picked bread and wine. But He just kinda left it at that. I mean, if it were me, I would've talked about how bread starts as a kernel of wheat and it has to be crushed. Then it has to have salt and oil and water added to that powder. Then it has to be "proofed" and also baked. And the wine! I would've explained how the grapes have to be crushed and then the precious juices collected and fermented. I would have reminded the disciples of the first miracle; how Jesus turned water into wine: the mundane into the extraordinary.

But Jesus didn't do any of that. He didn't unpack any of that rich symbolism. None! He let their minds settle on whatever they would, and He Himself focused on something deeper.

He didn't get all esoteric and overly, abstractly symbolic. He used symbolism, to be sure, but He used simple terms.

"This is My body, broken for you. Each of you: eat some"

"This is My blood, poured out for you. You know the old promises from being part of God's chosen people -- but with this pouring out, I'm giving you a new promise. A new contract, signed in my own blood"

Matthew's version of Jesus' last words go something like this: "I am always with you."

His presence. That's the promise. Always with us.

And the thing He chose as His memoriam? The one practical thing He pointed to and said "as often as you do this, remember Me"?

A meal together. Simple bread and wine. Sitting down together with other Jesus followers (laying on each other's chests, actually, if we define "reclining at table" in the true historic context) and eating a meal.

As often as you do this, remember Him. That was His request; the way He wanted to be remembered: being with us, eating a meal. Together.

Jesus, You are the most amazing person ever! Thank you for giving us such a concrete and practical yet richly symbolic image to use in memoriam. You are unforgettable.

translated by Can Opener Boy at 08:36