Asking for help is not always easy. Especially when it is help I know I don't really need. It's about not being lazy; not shirking. It's about integrity. Anyone who has a 3 year old child (or has been one!) has learned this lesson: sometimes it is important to do something just by myself, just to prove I can. Not to prove it to anyone else; simply to prove it to me.

That's what running has been like for me. I started running in June of 2008 and the changes I've seen within myself have been nothing short of remarkable. Miraculous, really.

When I set out to run the Portland Marathon in October 2010, and various people asked if I would be running for charity I knew it was something I just could not do. As noble and good as it would be, it just did not feel right in my heart. Running for a cause would certainly add motivation to my training, but it would also cloud things somehow. Selfish as it might sound, I didn't want to run for anyone else.

I had to do this for myself.

Once I'd run the marathon, and began to think about running another, I was surprised to find the idea of running for charity was still something I did not want to do. I was really hoping to get in to the 2011 NYC Marathon via their lottery system ('cause I'm nowhere near fast enough to get a guaranteed entry based on skill/timing!). Wanting badly to run in NYC though, I told myself I'd run for charity as a back-up plan: something I'd resort to as a way to get a guaranteed entry only if I had to. I felt that way right up until the drawing on Wednesday 27th April, when the website confirmed my fears: I had not been selected via the lottery.

I knew there would be perhaps 100,000 people or more who would be swooping down onto the official charities so I'd have to be quick. I took a break at work and began to actually look through the various charities I could apply to run for. That's when my heart began to change.

I realized there's another reason asking for help is difficult for me: it feels like an admission that I am not good enough, not bright enough, not strong enough. Reading through the charity webpages reminded me that, well, I'm not! I'm not good enough alone! No one is. I'm not bright enough to figure everything out on my own. No one is. And I'm not strong enough to get through this life alone. No one is.

Once I embraced that next-level measure of my own weakness, and allowed the humility to clear my perspective, I realized something else: Asking for help is sometimes easy:

If I have dropped a heavy load, it is hard to ask for help to pick it back up and carry it onward.

But If someone else has dropped a heavy load, and I stop to help them pick it up and carry it onward -- and in doing so realize that this load is so heavy I can't be the only one to help, then asking someone to help me as I help another...that comes easily.

So here I am. Asking for your help.

As I browsed through the charities, one stood out to me. the Multiple Myeloma Research Foundation (MMRF). As a Home Hospice RN by profession, I see the impact of this disease in my day-to-day work. But it is also personal for me. Cathy's mom died of multiple myeloma. She was only 68. Everyone who knew her tells stories of what an amazing woman she was. Vibrant, playful, compassionate, loyal, and loving to all. I wish I'd met her, but I never got the chance. You see, I met Cathy in May 1987, but multiple myeloma had already taken her mom's life in February of 1986. Her name was Josephine Mary (Fanucchi) Thompson -- and I'm running in her honor. I'm running so MMRF can help others beat this disease, get the chance to live to meet their family, and enjoy a full life.

Nearly 90% of every dollar donated to the MMRF goes directly to research!

Will you please support my participation in the 2011 New York City Marathon benefiting the MMRF? Your donation can help make the difference! I have made a commitment to raise at least $3000 by the race on Sunday November 6th. I need your help to get there! Please help as you can. It all adds up! On the right-hand side of my donations page you can select a suggested donation amount, or come up with whatever you feel comfortable donating. For those interested in a per-mile sponsorship, here's the math for you!Would you please consider sponsoring me? It is as simple as following the link above.

For more information, to make sure your money is going to a good cause and a reputale charity, you can follow this link to the MMRF site, and there's an NBC Nightline interview and article here, a reprint of a New Yorker article discussing the creative business model of MMRF here and the ubiquitous Wiki link is here.
Thank you in advance for your support!
~ Keith

Email ThisBlogThis!Share to TwitterShare to FacebookShare to Pinterest
labels: running

Death's Sting is Fleeting and Weak

I find it hard to put into words the depths of feeling I'm experiencing right now. My long time-friend, mentor & spiritual example Mark Macallister took his own life earlier this month after a long battle with depression and chronic pain. He leaves behind his amazing wife Jody and two beautiful and wonderful kids, Levi & Bree. This picture shows their family together and at peace. 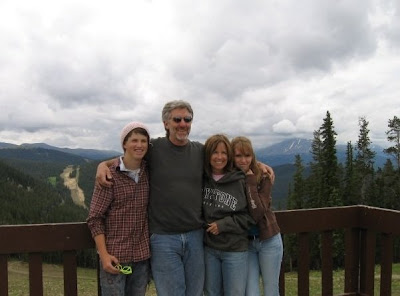 My heart hurts quite a bit right now due to the tragic, senseless and sudden loss of so bright a light as Mark shone to the world around. He was gregarious and compassionate and had friends in such a wide range of places I was almost always surprised when someone I knew said "Oh, Mark? Yeah, I've known Mark for years". He would never be the one to shine a light on himself, always demuring and deferring to others in a humility that was so natural and secure.

Mark exemplified to me the heart of love and care for others that is the best description of the word "Pastor" I know. It was primarily his influence in my life that opened to me the possibility of giving my life away to others in this pastoral way as well.

Living as followers of Jesus, Mark and I shared a hope that there is something beyond this life -- something which defies description although better men than me have certainly tried. I do take comfort in knowing Mark is "in a better place" although that rings so hollow in my ears because his current experience is so much richer than that little phrase could possibly convey, but also beacuse that little phrase sounds so trite and weak when placed against the pain of his loss to my heart.

I do also take comfort in knowing that death itslef was never supposed to be part of our story -- and so it will be done away with in the final analysis. And so I have a deep appreciation for John Donne's classic poem as well. I'd heard the opening line many times of course, but seeing "Wit" with Emma Thompson really galvanized within me an appreciation for the epochs-long wrestling match with death we humans have undergone.

DEATH be not proud, though some have called thee
Mighty and dreadfull, for, thou art not so,
For, those, whom thou think'st, thou dost overthrow,
Die not, poore death, nor yet canst thou kill me.
From rest and sleepe, which but thy pictures bee,
Much pleasure, then from thee, much more must flow,
And soonest our best men with thee doe goe,
Rest of their bones, and soules deliverie.
Thou art slave to Fate, Chance, kings, and desperate men,
And dost with poyson, warre, and sicknesse dwell,
And poppie, or charmes can make us sleepe as well,
And better then thy stroake; why swell'st thou then;
One short sleepe past, wee wake eternally,
And death shall be no more; death, thou shalt die.

Requiesact in pace Mark, until we meet again when death itself has been put away.

A Week at an Abbey

I recently spent a week at an Abbey in Mt. Angel, OR. 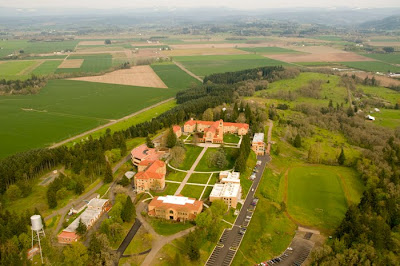 I thought I was going there for some solitude; some silence. Apparently I was wrong.

I did spend a significant amount of time alone, and being quiet, and that was nice. It was restful and restorative -- but I learned some things about solitude and silence I was not aware of before. Some I learned from my reading, and some I learned from just being there, alone. A Monk's room is sometimes referred to as a cell -- and it has been said

Go into your cell,
and your cell will teach you
everything you need to know

I wish I had more to say about it here, but I had such rich time journaling and reading and being alone with God that I feel no need. =)

If there are specific questions anyone has I am happy to answer them either here on the blog in comments, or privately in eMail -- but simply chronicling my experience here (which is what I might have done in the past) strikes me as something which would somehow take away from the experience.