Week twenty-three is now history. I completed the marathon training program, and ran a marathon.

I'm not going to wear a watch or a heart-rate monitor. I'm not going to plot a course or go back and try and figure it out on Google Maps. I'm just going to go for a run. When I get tired I'll stop and walk. When I feel like it I will run again. When I feel like being done, I'll come home. This will not be a training run, it will be a recreational run. My training runs are usually enjoyable -- but on Monday, that is going to be one great run!

Thanks so much for reading all these posts and following my progress. As I mentioned in my last post, I have a couple races already scheduled, and I'm hoping to break 2:00 in the half-marathon. I don't plan to blog that training, but I'll post from time to time if something significant happens.

As usual, I have the "boring stuff" posted below. But in case you're interested, if you add up all my training from 24th May through 30th October I ran over 530 miles, taking over 92 hours, and burned nearly 70,000 calories. To put that into perspective: if I started running at midnight on a Monday morning, I would finish on Thursday at 8:17 pm -- and I would have run from my house to the California border, and then back again, and then gone for another little 23.5 mile run! And, if all the calories came only from burning fat, I'd have lost 19.8 pounds...of fat!

translated by Can Opener Boy at 13:46 No comments:

As I sit and type this, the marathon is a full 2 weeks in my rearview mirror. I had some computer glitches so I was unable to blog before now. As a result, all the stuff that was fresh in my mind is now not quite as fresh. Maybe that is a good thing because what has stuck with me are the few memories that perhaps are the most important. Here are the highlights.

First and foremost, the biggest highlight has to be accomplishing a goal that has been 2+ years in the coming. I can't tell you how it felt to cross that finish line and know that I'm not just a runner, I'm a marathoner. Me -- the pudgy un-athletic kid grew up into a guy who, at age 44 (45 next week!) broke 4:30 in my first marathon!

Another huge highlight (and major props) go to my wife Cathy for putting up with not only the mood swings of the last few weeks, but also my early-morning runs and early-evening bedtimes x 5+ months (not to mention hearing me rant about cross-training and rave about various running-related things all the time). She has been my number one fan and supporter.

Major props also go to Tom & Dawn Bartel for coming out and supporting me. They met me at around mile 1.5, and then showed up multiple other times on the course. Tom was also there rooting me on at about mile 26.1 -- just before I turned the corner and faced the finish line. It was so great to have them there as my own, personal cheering section! (And while she was not there for me specifically, a special nod goes to Janel Roden who surprised me late in the course with a hoot and a holler!)

Highlights of being out on the course were:

IT RAINED THE ENTIRE 4.5 HOURS I WAS ON THE COURSE! I absolutely love running in the rain so it was a phenomenal treat, and clear evidence that God loves me! =O)

The father/daughter pair running together.

The young woman who was running in honor of her uncle Doug who had died in the last year.

The 3-4 wheelchair racers I saw with heads down and super-buff arms propelling high-tech wheelchairs.

The huge crowds of spectators -- especially the ones who read my bib that said "My First" and cheered me on with "Lookin' good My First! You got this!" and stuff like that. Also the guy who gave me 10 style points for my heel-kick while crossing a bridge.

Not stopping to walk on the approach to the St. John's Bridge. That was cool to see all the other people stop and walk, but I didn't. I took plenty of walk breaks, but not there.

The multiple bands, and TONS of volunteers who handed out electrolyte drinks, and water, and gel and vaseline and stuff.

The other volunteers at the finish line who put a space-blanket around my shoulders, and a medal around my neck, and then gave me orange juice and other goodies while I was stil not quite in my right mind. Also huge props to the volunteers who were out so early taking our stuff and safely storing it away and then having it all organized so we could pick it up after the race!

The biggest props still go to Cathy. After crossing the finish line, and getting my medal and blanket, I wandered around aimlessly for a moment and heard this angelic voice calling my name. Cathy was there at the finish line behind a fence with the rest of the spectators, and had taken the two finish line photos below. She was in awe and said very nice things to and about me. She even gave me a through-the-fence smooch!

Here's a few shots from the race weekend. 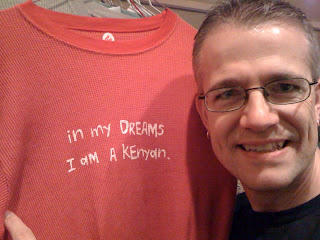 I saw this at the expo and almost bought it! 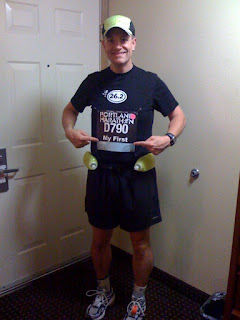 Here I am the night before, all geared up with no place to go (yet!) 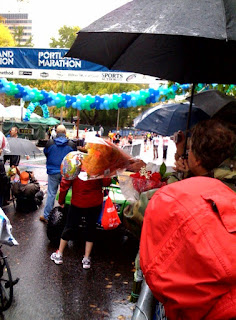 Just before crossing the finish line (click the pic & zoom in) 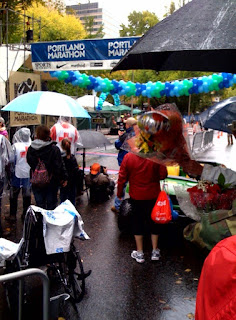 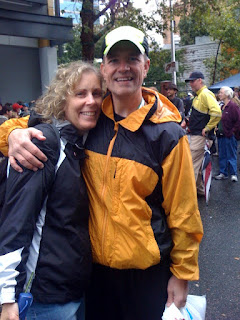 My number one fan and supporter! 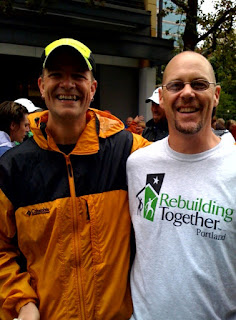 My ad-hoc coach, and encourager Tom!
For the nerds like me, you can see the Garmin data for my run here.

Week twenty two was a little funny. My body got so used to running so much, and now I've had so much rest and recovery, one of the hardest things is not to run too fast. I actually have to *work* not to run too fast (which, for me, is around 8:45 or so -- instead of my usual 9:45-ish)!

I have my sights set on my next two races. First, the Shellburg Falls Train Run. Then, I'm going to go for the Cascade Half Marathon again, and this time, see if I can break the 2:00 mark. Last year I hit 2:02, and would have made the 2:00 mark but sort of bonked in the last 2-3 miles. You can see that race here. Seriously -- look at my splits -- I was *so* close, until those last few miles. But now I'm another year stronger and another year better-trained, and I'm hoping to be better at following the training program this time. It's a bit abbreviated since I will only have 11 weeks instead of a full 16, but we'll see! This time it will include some track work, and I'll be doing some core work as well on my cross-training days.

Week twenty one was not really a training week as much as a race day and a recovery week!

I ran the Portland Marathon on Sunday 10-10-10, and my next-scheduled training run for recovery week was not until Saturday 10-16. I could have done some cross-training but, well, we all know how I've felt about cross-training up to this point, so why break a good streak. I do plan to cross-train next time I train for something...which will be soon. (more on that later)

Week twenty is now over -- my last official training run before the marathon was this morning.

~ Keith
translated by Can Opener Boy at 08:58 No comments:

Week nineteen -- one week to go. 8 days from now I will be on the course, giving it my all. Just 4 more runs: Monday, Wednesday, and Thursday for 30 minutes, and then Saturday for 20 minutes. Today's 6-miler was a walk in the park, and while my nerves are wondering "can I really do it?" my mind and spirit are repeating what everything I've read and heard has told me: "Trust your training" We'll see!

~ Keith
translated by Can Opener Boy at 10:40 No comments: