Once upon a time I destroyed a doll. That's not the way most fairy tales start, but this isn't a fairy tale. It is a real story about me.

The doll had those eyes where, if it was laying down, the eyes would be shut, but if it was standing up, its eyes would open. To an inquisitive 6 year old, that's pretty darn fascinating. I mean, how did this thing work? I simply had to know!

So while it was standing up, I poked it in the eyes (a little trick I learned from a guy named Moe -- nyuk nyuk nyuk!). The eyes bobbed away, and then bounced back into position. Fun! I did this a few times, tapping a little harder with each next poke. Then it happened: The doll's eyes bobbed away...and didn't come back. 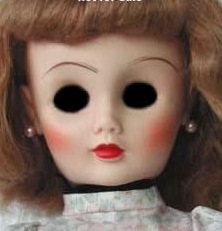 I was frightened for a couple different reasons. My first thought was about my sister: "Bobbi is going to be really upset!" My next thought was (and I'm being serious here): "OMG! This thing is going to come after me tonight and POKE OUT MY EYES JUST LIKE I DID TO IT!!!" I was so scared I dropped the doll and literally ran out of the room. I think I may have been screaming. All I know is I did not go to my sister and tell her what I did. I don't think I went to anyone to tell them what I did. I knew they would find out eventually, but I was just so scared I think I went and hid somewhere for awhile.

Eventually I was found out. Bobbi was mad, but that passed.
My fear remained.
For years.
Years.

Are you getting that?

For a six year old, a week is a long time, and I was in Jr. High School before I really started to get over it.

After that long intro, here's the story. The story of how I conquered the fear. Really, it is a story of who helped me conquer my fear. 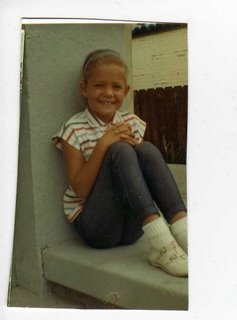 As I've said in earlier posts, I'm the youngest of 5 kids and I'm the only boy. JoAnn is the second oldest. She is 7 or 8 years older than me. For those who don't want to do the math, that puts her in "Graduated and moved away from home" grade by the time I was in 7th.

While she was away, she met Jesus. No really. She met the living God of the Universe and would talk to Him like a friend.

I was on the phone with her one pivotal day and was telling her about how scared I got when no one else was at home except me and that doll. JoAnn said something that would change my life forever (and yes, I know, forever is a much longer time than a week, or even years).

JoAnn told me when I was afraid I could ask Jesus to be with me. She told me what that looked like in her life, and she also told this to me in concrete terms my adolescent mind liked and could really get into. The logic went something like this: Jesus is God. God is Perfect. God is Love. Perfect Love gets rid of fear. So when I was really afraid, all I had to do was talk to Jesus like He was real, and ask Him to be there with me. Since Perfect Love would be there, the fear would have no choice but to leave.

I remember being very excited by this idea at the time. Then after we hung up reality broke in and I felt very foolish for thinking something like that would really "work".

Later that week my parents went bowling and Leslie was babysitting for some neighbors. I was alone at home. Just me, that doll, and my fear. As I went to my room to hide, I felt my skin start to go cold. As I sat there shaking, JoAnn's words came back to mind and I tried it. I prayed.

I think the fear had been gone for a full minute or more (which is also a very long time when you are really really scared) before I realized what had occurred. I was still alone in the house, and the doll was still there in the garage. But Someone else was with me. Jesus. And my fear was gone. I was at peace and I wasn't afraid anymore.

It would be another 10 years or so before I started really following Him; ordering my life around Him as The Central Figure. But that night started it all.

Today JoAnn lives in another city (and California is so big, it may as well be in a different state). We see each other infrequently. But to this day I credit JoAnn with being the first one to really practically introduce me to the idea of loving and depending on Jesus -- that I can talk to Him like normal. And that He loves me very much, so naturally He would love to spend time with me and of course He will help me.

So thanks Jo, you thought you were just helping your little brother get past some adolescent fear -- but instead you've helped lay a foundation in my life that persists in supporting me to this day!

translated by Can Opener Boy at 22:45