I'm a fan of American Idol. At first it is painful to watch because so many people are so clueless as to how little singing ability they have. I feel bad for them and want to ask: "doesn't anyone love you enough to tell you not to do this on national television?". But then as the season progresses, I enjoy seeing the folks with real talent shine, especially if it is mixed with a healthy dose of humilty. This season Melinda is the big winner in this department, IMHO. 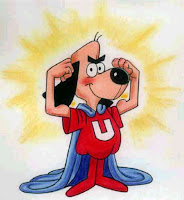 Maybe that's because I've always been a fan of "the underdog" -- someone who looks way behind but comes back to win in an unpredictable way against seemingly insurmountable odds -- often someone who seems not only behind and down, but being beaten and kicked: "downtrodden". It may sound crazy, but if I am watching a sporting event, especially football, I always root for whoever is behind. If they score and take the lead, I switch sides and root for whoever is now behind. I'm more interested in both teams playing hard and overcoming challenges than I am in one team simply running roughshod over the other.

Somehow it just feels right to me to cheer for the ones with seemingly no chance to beat the bully. I suppose this is a bit autobiographical, but I also think this sort of hope-against-hope embodies the gospel as well. And who doesn't love a good Horatio Alger story anyway, huh?

Then, recently, I heard about a blog called http://www.votefortheworst.com.

I'm bummed by this! I understand their purpose and I suppose they "have the right" to do this, but it seems to me a poor use of technology; a mean reason to have a blog. It is a very underhanded (should I say it? I will: immoral) way to manipulate a situation. It's like a nationwide game of hogging.

This is not a good thing.

With friends like these, everyone gets more salt in their wounds.

The owners of this blog say America is helped because it makes the show somehow more interesting or enjoyable -- they're just giving the American people a little more entertainment, and thereby also giving the producers what they want: higher ratings. And after all, the person who likes to sing gets to stay on the show longer! Everyone wins, right?

I imagine being on the show as something akin to living in a fishbowl. VFTW folks seem to think the show and their blog is about the pet store owners and the little kid who gets the aquarium, and they say right on their front page: "We agree that a fish out of water is entertaining...". But the show, IMHO, is not about the American People. The show is not about the producers. The show is about the people singing their heart out. I think the show is about the unfortunate fish, living life on display. OK, OK, they auditioned and they want to be there on stage -- but I'm pretty safe in assuming they don't want to be patronized or intentionally humiliated for someone else's enjoyment.

Maybe in a cartoon online, abusing a fish is funny.

But dealing with real people is a different thing altogether. The way I see it the folks at VFTW are just bullies having a laugh at someone else's expense. It's Sanjaya Malakar at the moment, but who is next?

It would be bad enough if a bunch of people started a private word-of-mouth game to do this, but what makes me really steamed is they've created this blog and are ostensibly asking everyone to join in the "fun" of adding insult to injury.

Maybe their influence on the results is not statistically significant. Maybe Sanjaya is still on the show because a legitimate amount of people actually voted for him, and less people legitimately voted for Brandon.

I guess in this case the American Idol Viewer is the underdog I'm currently rooting for.

translated by Can Opener Boy at 05:59