A Safe Place to Be 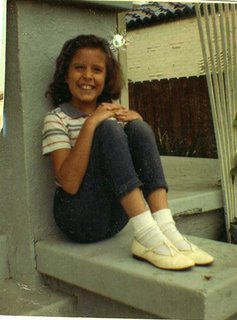 This is my sister Bobbi. She's ten years older than me. She's always been cool!

In the post I wrote about my sister Jo Ann, I mentioned a doll. The doll belonged to Bobbi.

I have a lot of other good memories of her as well. She and her boyfriend Scott took me in his jeep to play in the snow on Mt. Hood. And she was also was really good at putting up with my "annoying little brother" routine. Her bedroom was downstairs and she had a Persian rug on her ceiling. She worked at Nordstrom and had a poster for Famolares. She was cool.

Once when she was in High School and had moved out to live in a little house with some friends, I spent the day at her place. I remember they had a room full of black-light posters that was so cool! And in their back yard, they had a few large chunks of amethyst quartz. She let me take a huge hunk home and I used it as a door-stop for years. None of us knew at the time how valuable it was -- so if you were the one who bought it at the garage sale a few years later, good find!

Those are all fun memories, but the real thing which stands out in my mind is during the season when I was most frightened by the doll, Bobbi did something extraordinary -- she opened her home to me, repeatedly. On Saturday nights, my parents would go bowling and I would often be left home alone, since Leslie was babysitting a lot. The fear got so bad I would really freak out. I tried hanging out with Leslie while babysitting but that didn't always work. Once, I went to spend the evening with Bobbi and her husband. They lived in a mobile home a few miles away. It was great. We played games and hung out and she just was, I dunno, "normal". It wasn't like being babysat, it was like hanging out with a friend.

This began a pattern of spending Saturday nights at her house with her and her husband. Mom & Dad would drop me off on the way to bowling, and then pick me up Sunday morning on the way to church.

I guess Bobbi would consider herself the "black sheep of the family" but to me she was always someone I could let down my guard with. Like, she had been through some hard stuff, so she could understand my feelings or something. I liked being with her because there was no pretense. She was real.

Since we've all grown up and moved away, my communication with my sisters has been anything but frequent or consistent. But my visits and phone calls with Bobbi have always been fun to me. It is like so little has changed -- she is still very real. And I still feel very safe and loved.

Today Bobbi lives in another state. We see each other infrequently. But to this day I credit Bobbi with teaching me the value of accepting people for who they are; about relational warmth and love. And I credit her with teaching me about living life with passion and honesty about who I am.

So thanks Bobbi, you thought you were just helping your little brother get past some adolescent fear -- but instead you've helped lay a foundation in my life that persists in supporting me to this day!

translated by Can Opener Boy at 10:15