I'm a Christian. Literally "Little Christ" or "Christlike". To me, that means I follow Jesus and try to model my life after Him. Not only after what He did and said, but what He does and says. Fundamental to my belief system is that Jesus is, in fact, alive and well. He beat death. That is, after all, what Good Friday and Easter are all about.

According to the Bible, Jesus' followers were first called "Christians" in a little town called Antioch, near present day Syria & Jordan. The name, at the time, was an epithet. Being identified as a "Christian" was bad for one's professional and social life.

This kind of persecution happens today in certain countries, especially in Access Restricted Nations in Asia (ARNA). Behind the "bamboo curtain", Fascism (masquerading as Communism) lives on in China and other countries.

Today, people are beaten and killed for being Christians. People's basic human rights are violated on a daily basis -- simply because they have given their life (sometimes literally) to following Jesus. To some people this may sound silly or alarmist. But it is true. I know someone who knows first-hand. This very close friend of mine has had personal friends killed or beaten & raped and left for dead. But not in America. This friend travels to other countries regularly in order to help people who are trying to follow Jesus in these places. I've seen pictures and video. It is real.

That's why it is so upsetting to me when I hear there are American Christians complaining about being "persecuted" for their faith here in the good ol' U S of A.

Pshaw. Rubbish. Not worthy of comparison.

It is like the whiny math nerd in 8th grade who blows away the curve which causes everyone else in the class to get a C or worse, who then wastes 30 minutes of class time complaining to the teacher about the 2 questions he missed. (I know, because I was that kid, but that is another blog). My point is this: American Christians know almost nothing about real persecution, at least not yet. Who knows what the future holds?

A voice recently sprang up on nationally syndicated television. This voice said it is wrong for American Christians to complain like this. The person behind the voice is, as far as I know, not a follower of Jesus.

When Jesus was riding in to Jerusalem on the back of a donkey, and the crowds were shouting "Hosanna!" and "Hail! Son of David!" the religious leaders of the day told Jesus He ought to make them stop; they were being unseemly and blasphemous. Jesus told them "If these people stop, the rocks will cry out."

There are other examples in the Bible of God using a voice outside the community of faith to call out the imposters among us -- and to call out to those of us who are really trying to live like Jesus too. These voices don't call us into a place of defensiveness or divisive I-Told-You-So-ism, but instead into a deeper place of humility and service.

I could go on, but this video clip speaks for itself. It is Bill Maher. I've included two versions (both in QuickTime .mov format). The first is 3:48 long and is 6.5 Mb. The second clip (containing the really really good part) is only 0:47 long, and is a smaller file.

Comment away -- I think this is good discussion fodder. 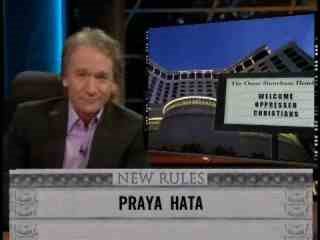 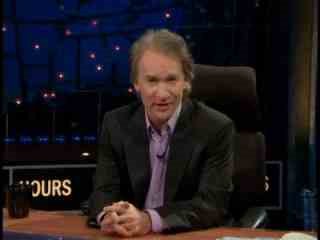 translated by Can Opener Boy at 17:38