Every year millions of people follow the results of various awards shows. This past Sunday we watched the Oscars. There are also the Emmys, the Tonys, the Grammys, and more.

Today I'd like to talk a little about: the -archies

In case you didn't already know, 8th March is International Women's Day. You can read a brief history of the day at this United Nations page.

I heard about it in Rachelle's post about Dismantling Patriarchy. Over on Rachelle's blog, she has a list of various bloggers who are also covering this topic.

I appreciate her use of the word "dismantle" instead of "overthrow". For me, this speaks of a collaborative effort to work for a better future than the past we've lived through. Growing up as a male in the turbulent bra-burning 1960s and the vote-for-the-ERA 1970's, it always struck me "These women don't want equality; they want a turn at superiority!" As a follower of Jesus, and as a man, I'm very glad Rachelle is espousing a different ideal.

"No book has yet been written in praise of a woman who let her husband and children starve or suffer while she invented even the most useful things, or wrote books, or expressed herself in art, or evolved philosophic systems."
~ Anna Garlin Spencer
~ Woman's Share in Social Culture, 1912

"I have yet to hear a man ask for advice on how to combine marriage and a career."
~ Gloria Steinem

I think great strides have been made in the last 50 years, but I also believe we have a long way to go. I'm no historian or cultural anthropologist, but I don't think I'm going out on any limbs when I say I think the world has been a patriarchy for a long long long time. I'm sure someone who knows more about it could point out a few matriarchal societies but I think, in the world at large, men have pretty much always ruled and led.

That hasn't always been bad. As a man* who thinks he is a pretty good guy I have to point out that not all men are evil. But taken as a whole, in this long-standing patriarchy there have been too many examples of men dominating instead of leading, and enslaving instead of ruling.

I'm kinda over the "men are better than women" implications getting subconscious air time in a lot of Christian media too. Instead of being an agent to transform culture into a better place, some of the church is instead being swayed by the surrounding culture and becoming less Christ-like.

I'm very glad to be part of an association of churches which promotes the autonomy of the local church, and also encourages individuals to wrestle with challenging issues. On the Vineyard USA website, for example, you can read articles both for and against the idea of ordaining women. This kind of healthy exploration and discussion leads us to value one another and grow in faith.

I used to be way more "complementarian". (Keith's definition: men & women are:These days I lean toward being "egalitarian". (Keith's definition: men & women are:I think there is a lot of validity to the whole Mars/Venus thing. Men and women are different in a lot of ways. I think God may have had some reason for making Adam first, then Eve. And I think God must have had some reason for having the masculine pronoun used to describe the Godhead the majority of the time in the bible [sidenote: no gender-specific terms can adequately describe a Being whose very Nature is far above and beyond such limitations anyway].

But to infer the idea of men being more suited to certain "leadership" and "initiator" roles (where most of the power is in the world) while women are better suited to "follower" and "responsive" roles? This, to me, seems to be too much of a leap -- a jumping to conclusions.

And I also think most of the pointing to experience is mainly chicken and egg stuff -- like "But I'm just a natural leader and my wife is just naturally submissive!" says more to me about the culture in which s/he has been raised and shaped than it does about an indwelling expression of the image of God. 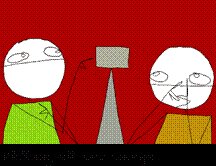 So patriarchy isn't a perfect system. And Rachelle isn't talking about revising or repairing it. She's talking about dismantling it. What'll that leave? I dunno. I mean no disprespect to women when I say this, but I think a matriarchy would be just as grievously errant and just as egregiously abusive.

Anarchy is not the answer either. While this may be arguable, I believe "faulty government" is still better than "no government".

Monarchy and thearchy have been tried. From what I've read and understood about them, monarchies implode or get overthrown, and thearchies are (all too often) simply uber-twisted versions of patriarchy anyway.

That leaves two other viable -archies I can think of: Oligarchy & Polyarchy. Both have merit.

I think our current democratic republic here in the U.S.A. is (despite its many faults) the best representative oligarchy we've seen in world history [waves flag].

But on the small scale, like in friendships and such -- you know, the circles of people with whom we spend our day-to-day lives -- I think polyarchy is the way to go. To paraphrase Lincoln's famous Gettysburg address, I think each little "government of the friends, by the friends, and for the friends" works pretty well. Even a polyarchy, though, isn't fully democratic. At times the "buck has to stop" with someone when consensus can't be reached and the issue at hand is important enough to demand a decision or action. As long as the group in question agrees on who that person is at any time or season or event, then things typically flow smoothly, at least in my experience.

If my desire is a local polyarchy within a broader oligarchy, then what can I do to bring this about?

Rachelle quoted the Indigo Girls' song Hammer & a Nail. I like that song. But I also like Ben Harper's powerful song With My Own Two Hands

Both songs remind me of the old adages:

"better to light a candle than curse the darkness"

sow a thought reap a deed
sow a deed reap a habit
sow a habit reap a life
sow a life, reap a world

So when the rubber meets the road what will I do? What deeds will I sow? Locally and globally?

I've done this blog and will continue to express publicly the benefits of polyarchy in God's Kingdom.

I'll respect and express appreciation for the contributions of women I'm blessed to walk alongside in my own life.

I'll use language that emphasizes the value of all people regardless of gender.

I'll champion those who are being abused or held back (wherever they may be), and use my energies and resources to help them change their situation.

And I'll encourage others -- both men and women -- to live and speak in like manner.

* a man who, btw, grew up as the only boy and the youngest of 5 kids, and who now works as an RN (one of the few professional fields where women outnumber men).

translated by Can Opener Boy at 08:00

Email ThisBlogThis!Share to TwitterShare to FacebookShare to Pinterest
labels: blog

COB,
This is really great. I appreciate your perspective on things... this particular post made me think! I really liked the following part of the passage

"At times the "buck has to stop" with someone when consensus can't be reached and the issue at hand is important enough to demand a decision or action. As long as the group in question agrees on who that person is at any time or season or event, then things typically flow smoothly, at least in my experience."

I have had a laughably similar experience where these ideas you've stated have proven to be true. It's these foundational truths that need to be recognized in any group, I think, regardless of size or purpose.

p.s. the humble nature with which you write is refreshing. :)

COB... I have to disagree with you on this... According to my mother EVERY DAY IS MOTHER'S DAY, which is her little way of saying EVERY DAY IS WOMAN'S DAY! :)

To be honest, I had no idea there was such a thing, but I can't wait for the day when there will be no need for a woman's "day". If there was one thing we could use from the ancient Spartans...