I received an eMail from my sister Leslie today. She had some great insights I'm sharing here with her permission...


As I meditated on this verse earlier this week, I saw it anew. I have never really given any thought before to the word

Doesn't exactly conjure up a picture of a closed fist being pried open
one sweaty finger at a time, does it?

with fervor and finesse as hard and as fast as he can away from himself.

HURL them at Him full force!!! 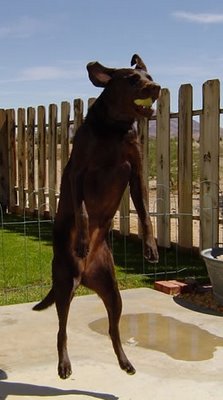 My sister JoAnn has a labrador that loves to catch and to play fetch. They have taught their dog to catch a ball thrown right at her face--HARD--at close range.

"Loose-E" is amazing...she doesn't flinch. She stands at attention, pops open her mouth at just the last second and PHOOMP--she's got the ball.

That's how it is with our burdens. It's scary to let go--to CAST them on God full force.

In our pride, we want to show others our burdens "look what I'm carrying......."

In our fear, we want to take them apart in manageable pieces, gently coaxing them out of our hands. It might hurt to hurl them.

BUT GOD DOESN'T FLINCH...He wants them.

CAST them FULL FORCE at Him.
He wants them.
PHOOMP
He'll catch them
PHOOMP
He NEVER misses
PHOOMP

And, unlike Loose E, He doesn't return our drool-covered burden for another go! 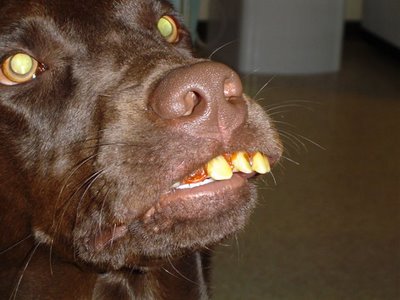 wanting more of Him,

translated by Can Opener Boy at 18:13

But I am disturbed that anyone would buy those novelty shop "hillbilly teeth" for a dog.

The really disturbing thing is they didn't buy them for Loose-E. I think they bought them for my nephew Caleb, and he just shares them with her! =B