In an earlier post I mentioned how someone helped me look at the idea of being "holy" as being not so much "less bad and more good" and more like just "being fully authentically who I am made to be." That will have a net result of the old definition, but has a different focus for me as I live it out. I'm learning more about that, but it comes with a price. It is hard. It comes with bumps and bruises and deep cuts and lacerations to my soul. 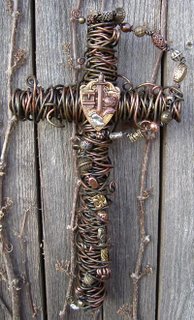 In Ephesians 6, Paul encourages us to stand. He uses that word a lot in that one chapter. When I think of that word, I think of it as opposed to sitting. No big deal. But I don't think that is what he meant. If this whole picture of military armor is designed just so we can stand, then there must be more to "standing" than "just standing around". It makes me think of other verses where we're encouraged "Do not grow weary in doing good." Why would we need to be encouraged to not lose heart unless sometimes "doing good" or just "standing" would become really hard.

Years ago a good friend of mine once summed up one facet of the Christian life in a very concise way. He said this:

He said sometimes life is like standing in a wind tunnel.

Only not the kind with an airplane or car with soft sand flowing across it checking the aerodynamics. In life's wind tunnel, it is more like me, alone, leaning into the wind, straining with everything I have just to stand. It is hard work.

And then BAM! I get smacked in the head by a coke bottle that has come whistling out of the air vent with no warning. WHAM! Another one. The devil lies to me about who I really am and my heart hurts: SMACK! I say or do something stupid and, in bewilderment, see a coke bottle leaving my own hand, tossed into the windstream ahead of me only to land BASHING!!! into my face. Other times it is not me, but a friend misunderstands me and it takes loads of work to clean up: BAM! A friend says something hurtful and POW! another coke bottle hits me in the face. I try to hang in there and be as humble as possible, apologize when I need to, and SMACK! another bottle bludgeons me anyway.

My heart is ravaged and I make the painful choice to keep it vulnerable and open. In that deep place I then try to communicate how the friend is not the only one hurting here. It would be nice if there were some small acknowledgement; that I, too, am hurting... and yet in that place of raw vulnerability all I hear is the empty wind. The pain, unacknowledged, is doubled. I find the silence is sometimes worse than all the coke bottles life sends careening toward my bloodied and battered face. In the silence I hear dark whispers saying maybe I was right after all. Maybe I am all alone.

And yet I stand. Somehow I know I am not totally alone. Somehow, with a strength that is not my own, I stand. Jesus whispers to my deepest heart:

So I stand. Beaten; bloody; yet standing.

Despite the comfort I've just received, the tunnel is dark. It is bleak. There is no light ahead, only the wind and the silence; the loneliness and the promise of more coke bottles. I'm in so much pain, and the wind just rages on. All this air, yet it is so hard to breathe. My mouth hangs open. I'm so dry. So thirsty.

Like the aqueduct built in the 6th century B.C. by Eupalinos. A tunnel is really just a conduit. A pipe. A method for conveying water from its source to where it is needed. The best aqueducts are tunnels because being deep underground protects their precious content from attack. This famous aqueduct is now open to visitors. From deep inside it looks and feels like just another dark lonely tunnel. 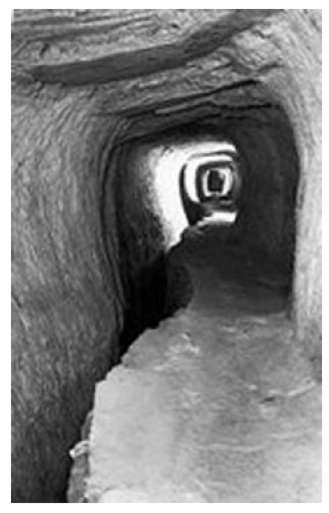 But it is more. It is a source of life. Needful things, those.

And I hear Him say He acknowledges my pain. He knows all too well what it feels like; knows how hard it is to simply stand. And He says I can do this, because I am made in His image. Imago Dei. The Image of God. He says I am far more than a beaten & bloodied man, alone inside a wind tunnel. He says in truth I am the tunnel. I am the aqueduct.

He says I am a conduit in which and through which His life flows. And I am not the only one with this calling. There are others, my friend among them. That truth gives me hope. Hope for the future, both distant and near.

But He says for this to happen, I need to follow Him. And following Him means picking up my cross. In Jesus' time on earth that was a vivid image for people. It doesn't mean that much personally to me though. He knows this, and has compassion on me. He gives me a different picture; one for me, for today. Instead of "picking up my cross" and following Him, He says to follow Him in this I must
stay WHAP!
in WHACK!
the SMACK!
tunnel WHAM!
a POW!
little OOPH!
bit BAM!
longer.

He says I must stand. He says I can stand.

So I'm standing; hurting, yet hopeful.

translated by Can Opener Boy at 10:51

God is your armor. He protects you. Salvation is your helmet. Truth, righteousness, peace, faith, The Word, and prayer are your "weapons".

He's guaranteed to be there for you. Others may leave you, but He remains always.

Stand Dude! Point that helmet of salvation into the wind!

Sometimes knowing that one can identify/empathize with us helps us keep standing. When that isn't enough, knowing that The One understands how difficult life can be keeps us standing or stands us up again.

I hope this helps you stand because when I wrote this God Himself stood me up when I could not stand on my own. HE is Faithful!

Cage of Pain
Longing for release
Shrinks my cell

My Only hope
Fleeting

Maker of Heaven
Create Christ in me
Will I Recognize You?