My friend Marie recently blogged about her experiences at HeartChange. I began to comment on her post, but soon realized I had more to say, so here I am beginning to say it.

It may take a couple posts to get it all in, because there is some backstory I think is important.

Here's how it started for me. 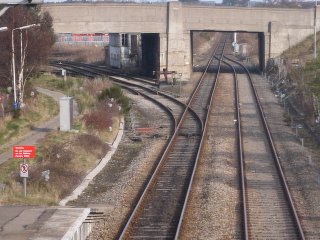 You know the things on railroad tracks where you pull a lever, and the train changes directions?

In October of 2003 I flew to Vancouver, WA for a weekend quasi-business trip. Somewhere along the way, God pulled that lever, and my track changed. I just didn't know it yet. It was August of 2004 before I actually reached the place where I switched tracks.

Pre-Switch:
In late 2003 I began to realize I needed to take a break from what I was doing at church. At the time I was leading the music department and had been in the band for a number of years before that. While in Vancouver, I felt God begin to nudge my heart that it would be good for me to take a sabbatical; a break to rest and pull away and spend time with and listen to Him.

This nudging was redoubled in me about a month later at a weekend conference being hosted by my church in California.

So in early April 2004, I stepped away from the role(s) I had held for a number of years and just hung out with God. I still went to my "day job" as an RN, but my Sundays were filled with very different things than they had been for years. The plan was to be "off" for a total of four months and then resume my role(s). But during my time off, God changed my tracks, so I have never been back -- and at this writing, I don't think I will.

As of July of 2004 nearing the end of my sabbatical, I'd been in the band for 15 years and led the band for almost 8 years. It had been a good thing, but I was feeling pulled from that into a more pastoral care type of role. I shared that with my pastor and his wife, and they blessed the changes God was doing in me.

Later that month I was back in Vancouver, WA. This time it was for a week-long Vineyard Pastor's conference.

I mentioned the changes in me to a good friend Eric Sandras. He pastors the Olympic Vineyard in Port Angeles, WA (and he wrote Buck Naked Faith. If you like honesty and humor, mixed with vulnerability and God's love, you'll like Buck Naked Faith).

Eric told me "Keith, you gotta go to workshop called HeartChange! We're hosting it next month in Port Angeles!"

I had never heard of it before. But Eric was so enthusiastic, He said if I paid for the flight to Seattle, he would drive 2.5 hours south to pick me up, drive me home to his place, give me a room for the week, let me borrow his car, then drive me back to the airport. It was that valuable to him that he was willing to sacrifice like that to help me go.

So I did. I looked at the HeartChange website and felt a pull, so I went. I thought "Great. Eric supports this pretty strongly, and I'll get some skills and insight into how to help broken people"

The Switch:
I journaled a bit on the plane to Seattle, and then pulled out my iPod to veg and get away inside myself. That's when God's October 2003 lever pull finally kicked in and my tracks actually changed.

I've never heard God's audible voice, and I struggle sometimes wondering whether I ever really hear Him in my heart at all, you know? But sometimes, in the most natural of choices, God breathes a freshness and suddenly, wonderfully, everything is new and different, and I know in my heart it is the life-giving breath of my Father.

I like stories. I like telling stories, but mostly I like being told stories. I decided (with what I now realize as God's guidance) to listen to Meryl Streep reading "The Velveteen Rabbit" with George Winston on piano in the background -- very soothing. You can get it on Amazon here.

About 2/3 of the way through the story I started getting a little freaked out. I knew the story line and the last 1/3 of the story killed me this time. I was looking for some veg time inside myself, but I had forgotten God was in there with me! =O) I've always thought of myself as a heart-on-the-sleeve type of guy. being "vulnerable" and "open" and "authentic" with others has never been too problemmatic for me. In fact, I've learned the more "real" I am with others, the more they love and accept me for who I am, and the better I feel about my life.

Or so I thought. God showed me some faulty thinking I had been doing, just like the rabbit: The part about "I have to be real to be loved."

God revelead to me His truth: "The opposite is true Keith. The way to become really and truly real is to let yourself be loved. Your ideas of vulnerability and authenticity have, up to this point, been motivated by a desire to be liked; by fear of rejection. But there is deeper stuff in you that even you don't acknowledge yet. The only way you can really be the you I created you to be is by allowing Me to love you in deeper ways than you've allowed in the past, and by allowing Me to express that love to you through others -- letting others in deeper than you've done in the past."

The workshop was really good. But letting God and people in to really love me was enormous. Seriously. I'm not overstating things when I say to you my life has not been the same since.

I'll talk more about my actual experiences at the workshop in a later post. But for now, the best plug I can give for it is this:

It is the 3rd best thing I have ever done in my life. Ever.

#1: Fully surrendering to God and becoming a Jesus follower
#2: Marry Cathy
#3: go to a HeartChange workshop.

translated by Can Opener Boy at 08:11