Like many Americans I made a new year's resolution to lose weight and get into better shape.

Like many Americans I paid money for a gym membership (sing it with me: Y-M-C-A!). 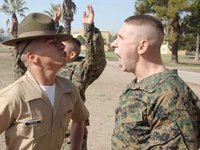 Like many Americans, I have made good on my resolution so far. I have gone to "Dawn Patrol" for 2 weeks now. Apparently it used to be called "Boot Camp" but that scared people away.

Like many Americans I am now wondering: "What the heck was I thinking? I hurt in places I forgot I had places!"

For the most part it is enjoyable and productive, for the following reasons:

I'm in a small class
There are only 5-7 people at any given time. For some reason, getting to know the people who are in the torture chamber with me makes the torture more bearable. Misery loves company and all that. In the past when I have started exercising, it was going running or doing push-ups in my garage all by myself. That didn't last very long.

The class is early in the day
The class starts at 6:15 a.m. I'm a morning person anyway, but getting my blood pumping that early really effects me: I feel more energetic throughout the day. Working out in the afternoon would mean showering again, and two changes of clothes. That would be more hassle, which would mean less incentive to do it.

The class is an hour long
In the past it has been my tendency to start small and try to build -- which ends up with me never really getting anywhere. Or, I bite off more than I can chew, and lose momentum. An hour is just right: not so long it is tedious, but long enough to kick my butt!

The class is 3 days a week
The not-having-to-do-it-every-day factor makes it easier to deal with somehow.

The class is only a few blocks away
I live close enough to the YMCA to walk to class. I don't, but I could if I wanted to. It's nice to have options. Maybe when I have been to more classes I'll stop killing the planet by driving three blocks just to work out. See, it isn't so much the walk to class that is problematic; it's the (oof) "short" (oof) painful (oof) walk (oof) home. Did I mention I hurt in places I forgot I had places?

The people are like me
They aren't super-athletic people who seem to have as their life's goal making me feel puny or fat (my psyche was marred by P.E. class, and I have the dodge-ball scars to prove it). They are also not lycra-shrink-wrapped hard-bodies strutting around intimidating me. They are frumpy middle-aged people who breathe hard and sweat, but are doing it because of the fun and camaraderie instead of the posing and meat-marketing that goes on at the local health clubs.

The class kicks my butt!
Did I mention that already? It bears repeating. In the 6 classes I've been to, I have yet to be able to do everything they ask for as many repetitions as they ask.

For most of my life I've been overweight, so my legs are pretty firm and toned -- think about it, they've been carrying extra load for a long time now! Every day we do lunges. I *hate* lunges. The first day I thought I would love them: "Oh, leg stuff. Cool. I'll be fine with this!" WRONG!!!

And twice this week we underwent cruel punishment. I'll spare you the details, but only a sadistic gym teacher from the 50s could come up with a way to make a "game" out of wind-sprints. My lungs and heart are nowhere near as ready as my legs were, and my legs were not ready for that at all!

To top it off today we did "Lisa's Leg raises" (Lisa, whoever you are and wherever you are, I hate you and I always have). You may know these by some other name, but it is lying on one side and doing side-leg raises. Sounds easy right? Especially for someone whose legs are the least of his worries, right? WRONG! Do you know what an ITB is? I do. I'm an Orthopaedic RN, and I know all about ITBs. Or at least I thought I did until today. The ITB is one of the places I forgot I had that now hurts. I didn't injure it, I just exercised it! "But it is a good hurt." HA! That phrase sounded so good to me before. Before I hurt!

It is hard work. I huff and puff. I sweat. I stagger. I hurt. But it really is a good hurt, you know? It means I'm finally making my body do something with itself.

I'm only 2 weeks into it. 6 classes. That's just enough to get me excited and keep me going. But in a couple months when I am tired because I stayed up too late, or I have some other thing that comes up -- will I still have the same resolve I do today? Maybe. I guess we'll see.

I'll let you know in mid-March. Check in on me and ask, OK?

translated by Can Opener Boy at 14:00