Music to die by 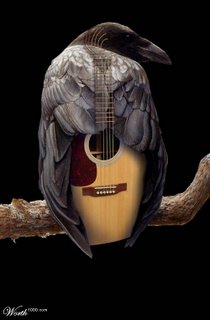 Here's a weird question: If you knew you were about to die, what music would you choose?

A friend of mine once thought maybe he was about to die. So he laid down on the couch and put on a Randy Travis CD. For him, that's what he wanted if it was the last music he'd hear this side of the harps (he's still with us, btw!).

I and another friend were talking about this and she asked me "If you knew you were about to die, what music would you listen to?"

If I knew I had time for only one or two songs, it would be (for samples, click the links and scroll down):

Is It OK If I Call You Mine? by Paul McCrane (lyrics). The song is from the perspective of a young man, singing to the girl he can never be with -- but I like to think of it as a song from me to God. knowing I'll be with Him soon.

and then, if there was time, I'd finish with:

Top Gun Anthem by Harold Faltermeyer and Steve Stevens (instrumental). The guitar solo just grabs me by the heart every time -- something about creativity I guess. That one is harder to articulate.

Now, if I knew I had an hour or so, and could listen to a sampling, it would be those two tunes, plus a few John Denver classics, including (not necessarily in order):

I love his voice, and his arrangements, but mainly it is the lyrics that resonate in my heart (I'll let you google the lyrics on your own). I identify with his passions and his pains, in many ways. Plus it's music I grew up listening to, so these songs in particular help me reflect on my life in a meaningful way; they form images for me which are rich with hope and passion.

What about you? What music would you listen to if you knew you had time for only one last song, or one last less-than-60-minutes-playlist? And why those songs?

translated by Can Opener Boy at 16:22

[I stopped by for another reason but got snagged by this.]

Music is very important to me, so this is a very interesting question. My wife still marvels (after 25 years as of yesterday!) at how much music I listen to (or how much I listen to music).

Anyway, if I only had time for one tune, I would opt for silence. I'd be interested trying to catch the transition in the "sound" of God's voice on either side of death.

But if things were slightly more relaxed, I'd want to hear "Heads or Tails", by Travis Larson Band. If there was more time than that, I'd like to hear "March of the Clouds" by Phil Keaggy. And if I had 30 minutes or more, I'd add "Lux Aeterna" by I cannot remember the composer (Morten Lauretsen?).
--Wayne

Oops, I forgot to say why I'd pick the songs I'd pick.

For TLB's Heads or Tails, the song speaks to me of the joy and creativity of God working in humanity. I hear the eternal breaking through into the temporal.

For Keaggy's March of the Clouds, I sense the curtain getting lifted or torn apart and I'm transported into the eternal. I sense God's pull on my life into His.

For Morten Lauridsen's (I checked the spelling) Lux Aeterna, it does it all.
--Wayne Iba