I read something yesterday which made me stop and think about our society's current views on the ideas of Introversion vs Extroversion. The book is The Great Emergence* by Phyllis Tickle. She writes this on p132:

"The twentieth century in the United States was characterized by many things, none of them more obvious than our originally slow, and eventually rapid, shift from being a rural to being an urban people. As the decades rolled along, more and more of us left the open spaces of pastures and plains for the defined ones of streets and neighborhoods. We laid aside as well the isolation and occasional socializing of country living for the constant companionship and unavoidable socializing of town and city life. Before the century's end, millions of us would not even be living in suburban neighborhoods any longer, but rather in the much tighter confines of apartment buildings or condo complexes or multifamily buildings. Likewise, instead of earning our livelihood in solitary or near-solitary labor, more and more of us were earning it in offices or factories or commercial enterprises where we were in constant and fairly intimate contact with one another for the bulk of every working day."

This made me think of some implications of her assertions.

Contrasted with the fast-paced image cuts of MTV and action-packed movies of today, old movies seem boring to some people. In fact, many people today have become so used to such fast-paced media bombardment many of us suffer from micro-boredom. You know, using your cell phone to check your eMail and update your status on Twitter and FaceBook, and check your MySpace...multiple times...in the unbearably long 5 minutes you spend standing in the checkout line at the grocery store! I do that. It is sort of addicting. It's why we call Blackberries "crackberries" and iPhones "crackphones" and FaceBook "crackbook". 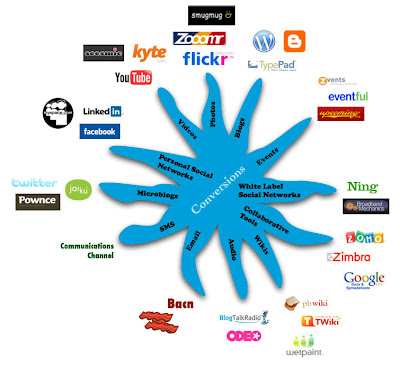 Like many people I know, I dislike being labeled. Sometimes labels can be helpful, other times they can be too compartmentalizing. A good example is the Myers-Briggs Type Indicator 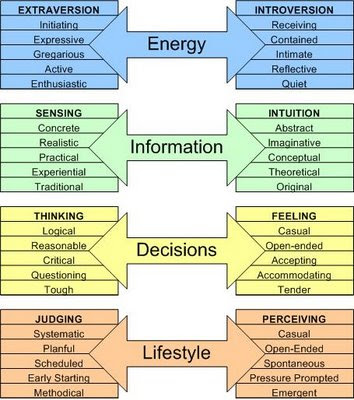 It is very either-or, but has a continuum between poles which helps the both-ands among us feel less pigeon-holed.

And all this made me think of a good friend of mine who is an extrovert. He is a year or two older than me and for his 40th birthday, his wife threw him a surprise party with 50-60 of his closest friends. He had a GREAT time and went on and on about how it was the best thing she'd ever done for him ever! I was at the party for a number of hours, and enjoyed myself, but stayed on the periphery. At one point I turned to my wife and said "For my 40th, please don't do this to me." She smiled, nodded, and said "Of course not!". She knows me. I like that.

On the right-hand side of this blog, if you scroll down, you will see that I score as an iNFj on Myers-Briggs. The letter "i" is lower case because my tendency to introversion is not strong. In fact, some people are surprised when they hear me say I am an introvert, because I am fairly gregarious. The key for me is long times spent with crowds of people drains my batteries, but when I am tired emotionally and spiritually, it is alone time which recharges my batteries.

Thinking backward in Ms. Tickle's time line, I wonder what my friend and I would have been like 100-150 years ago? Would he have been such an extrovert? Would I be so inclined to pull away and be alone? Perhaps the either-or-ness of the Myers-Briggs doesn't reflect true human nature and is instead more subtly influenced by the sociological changes in the recent 150 years than I originally thought.

So I wonder if the concepts of Introversion and Extroversion, as we know them today, are likewise fairly recent social constructs.

* I won't go into the details of why this is a wonderful book, but if you are a thoughtful follower of Jesus who would like a concise yet thorough historical perspective on how our current situation in Western / North American / U.S. Christianity fits into the bigger sociological context within world history you really do owe it to yourself to run out and buy it right now.

(this post is a documenting of a stream-of-thought which took around a minute to think through and over an hour to type up. It is a small example of what my friend Lisa calls "The Mind of Keith")

translated by Can Opener Boy at 12:09

Hmm. A couple of thoughts:

First, as you point out, introversion/extraversion has everything to do with "what gives you energy." There is a common misconception that it has to do with whether you like hanging around people, and (as you point out) that's simply not the case.

More to the point, the question "is it a recent social construct" is kind of moot because, well, here we are. I can't help but live in my present construct. Now it may well be that it was irrelevant at one time, and may be irrelevant in some future time. But for now, I find it useful:

Correct me if I'm wrong, but one common difference between introverts and extraverts is not just what gives/saps their energy, but the interplay between thoughts and words. As an introvert, I do not vocalize my thoughts until I've chosen the right words in my head. Kay, as an extravert, needs to think out loud and vocalize until she finds the right thought. (At least, I think this is an I/J difference and not a J/P difference. What do you think?)

Thanks for your thoughts. I think the question re: it's recentness is valid because I don't like it and I wonder if it has always been this way! (I'm less Zen than you I guess, although the NOW is getting more and more important to me).

And yes, the words thing is important, at least to me. I can process THOUSANDS of written words, and have even been known to speak them while processing my thoughts...but if someone ELSE is speaking, it wears me out quicker than you can say Jack Robinson.