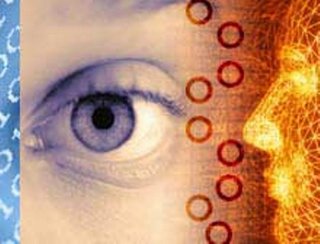 I've recently reconnected with a schoolmate from Junior High & High School named Sean. He sent me a recent picture and I had an interesting experience when first seeing it. Has this type of thing ever happened to you?

If someone had shown me the picture and asked me if I recognized the man there, I would have said no. If Sean had walked up to me in the street and said "Hi Keith, do you remember me?" I would have thought about it for a minute, and then probably would have said "Ummm, no. Should I?" But here's the weird thing: knowing it was him, and therefore having the image of the 8th-grade-Sean in my head just before looking at the picture, I could TOTALLY see that it was him.

Weird how our minds work huh? Or maybe it's just mine that works that way!??!?

It made me think of a couple stories from the bible.

In John 20:11-16 a woman named Mary is distraught over Jesus' death. She was moved greatly by his impact on her life, so she is weeping at the tomb. She hears his voice, but thinks he is just a gardener. When Jesus calls her name, she immediately recognizes him.

In Luke 24:13-31, a couple of Jesus' disciples (who'd spent the last three years with him!) spend a significant amount of time with him after his resurrection, but don't know it is him. It is only later that day, in the context of eating together, that they finally recognize who he is.

So here is the most significant person in the universe, and the people who loved him most did not recognize him at all...until they had a familiar context: eating; hearing their own name. His resurrected body must have looked like him, and yet not looked like him somehow.

1 John 3:2 implies our own resurrected bodies will likewise be somewhat different than our current bodies -- but in seeing him we'll become like him. My grandparents have been dead for a long time, but mom died a just few years ago. When I see them again will we recognize each other? What 'age' will we look?

Some mysterious and cool ponderables, yeah?

translated by Can Opener Boy at 11:13

It's your Reticular Activating System hard at work...ever heard of it? I know they didn't teach me about it in nursing school... it's pretty cool, actually...we can talk about it over dinner NEXT MONTH!! Woo HOO!!!!!!!!!