Jesus is the consumate storyteller. He often uses parables to explain the various aspects of the Kingdom of God, saying it is like: I think another one He'd say today is this:

Ever wonder how dogs can eat the same thing day after day after day? I have. Part of the reason might be because dogs don't have as many taste buds as people do. Dogs have about 1,700 taste buds on their tongues, while we humans have about 9,000! We can taste things about 5 times better than they can -- since they have only about 18% of our tasting ability. 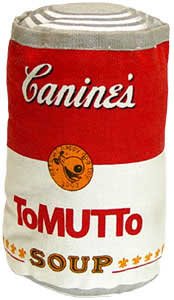 To put that in perspective, if you and your dog walk into my home and I have a pot of soup on the stove, you'll be able to smell it. You may even be able to discern it is split pea vs chicken noodle. But your dog will be able to smell our cats, and the garbage that needs to be taken out, and the recycling bin in the garage, and while the soup on the stove will be something your dog notices, it won't be just the soup -- your dog will discern each ingredient in the soup, as well as the relative quantity of each ingredient.

but your dog will be thinking:

"Hmmm, the ham is from West Virginia and the peas are from Trader Joe's, but Keith went a little heavy on the oregano. Mmmmm, nice touch on the cumin though, and also the nutmeg (although I am a bit disappointed it is powdered not freshly ground)"

I read an article recently where dogs are being used to sniff out cancer -- they can actually differentiate the smell of cancer cells!

I'm German on my dad's side, and Scottish (among other things) on my mom's side, but I don't remember anything specifically Scottish or German going on at home. No haggis, no schnitzel; to me growing up "ethnic food" was a corndog!

I grew up in Oregon, in a fairly homogeneous (read: "whitebread") culture. Oregon became a state on Feb 14th, 1859, with Civil War looming. New states were taking sides and Oregon was officially a Union State but, sadly, it was not until the late 1920s before a Black person could legally claim Oregon as a state of residence. By the time I moved there in 1970, the major cities were beginning to become more diverse, but in the suburbs like Oregon City it was all still very White. In 1983 there were 440 students in my High School graduating class. Of these we had 1 Black student and 1 Asian student. The other 438 were White. The school's total student population was around 1200 and each of the individuals mentioned above had 1 younger sibling, I think. 4 people of color and 1198 White people.

I may be missing a person or two, so the numbers may be slightly different, but you get the picture: As soup goes, that is pretty boring.

I now live in the San Francisco Bay Area, and I really appreciate the diversity. We have good soup (and Ethiopian food, and dolmas and pupusas and phu, etc!).

I think the Kingdom of God is supposed to be more like that: diverse and interesting. *

In the textbooks I grew up falling asleep on instead of reading, America was often acclaimed as "the great melting pot"; which was supposed to be a good thing -- any ingredient welcome, as long as it became a "part of the soup". Over the years, this has been so convoluted it is shameful -- but that is another post.

My point here is to say there need to remain cultural distinctives to allow for flavoring -- variety being the spice of life and all that.

I think an authentic community of Jesus followers will, ideally, have a multicultural vibe, as well as representing multiple generations and socio-economic variations. Unity amongst that kind of diversity is not simply a result of tolerant and progressive human goodwill; it is a sign of God's Spirit of Love.

And Jesus cares about each and every ingredient.

translated by Can Opener Boy at 15:00

All that is true, but we also have to remember that when God created people and in the early days of biblical record, people really didn't mix communities much. They had no transportation options and it was unusual for there to be much in the way of cultural diversity. I still think your right (about Jesus and diversity and melting pots), but the 'evolution' of society has certainly brought us more challenges in this area than there were before. I guess bottom line is, where ever God plants you, you need to be open to Him and open to loving those he loves, which is everyone!!

Hmmmm, interesting viewpoint. Could you elaborate some about the lack of cultural diversity? I see a different history, but don't want to just say "nuh UH!" and walk away... =O)

As generations unfolded, the fertile crescent's population spread ever outward, but "the whole world" was a pretty small place for a long time.

I'm thinking of Babel, and how God scattered people, sure -- but what about how often the people of Israel (and us today!) were guilty of melding norms & excesses from other cultures into their own practices, to the detriment of their faith? Syncretism still plagues us.

Rome spread various cultural elements from it's conquests throughout the empire. On Pentecost, people from many nations were present in Jerusalem. Phillip met the Ethiopian eunuch. Peter had to have a vision from God and be rebuked by Paul before he'd mingle with Gentiles. Paul wrote letters to Corinth telling the followers there to become more like Jesus and less like the world. And he wrote letters to the followers in Galatia telling them to be more like Jesus and less like the Judaizers who were trying to put Jewish culture too far into the Kingdom ethos.

So the way I see it, the idea of "many ingredients in one soup" is not a new one, and cultural diversity has been around for a long long time...