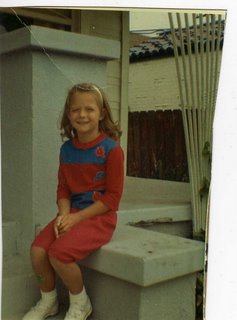 Marilyn helped me avoid that, and also went the extra mile. I'm the youngest of 5 kids, and the only boy. Marilyn is a little over 6 years older than me.

One morning, during the summer in my late elementary school years (between 5th and 6th grade I think), I woke up in a panic. I realized I had forgotten how to do long division. I hadn't had a dream or anything -- it was much worse than that. For some reason it just hit me over my bowl of sugar-laden Cheerios: I had no idea how to do long division! (And I'm dating myself here, but I was a Senior in High School before I owned a calculator, and even then they were frowned upon).

I hadn't gone completely blank -- I knew what the symbols looked like, and I knew some memorized answers. Like, I knew

so I also knew

Likewise, I could do the math and tell you that

But if you asked me to do

I could set up the problem, but then I would just stare at it and sweat, not knowing what to do.

I don't remember what I did about it. I don't remember who I told or if I told anyone at all. Apparently I was in such a state I blacked out! My next memory is of Marilyn and I sitting at the kitchen table, with some paper and pencils. She started with some easy ones and then worked with me on progressively more difficult problems. She showed me not just the how but the why; helped me really understand it. When she was done I could really do long division again -- not just parrot some memorized answers.

As far back as I can remember I've been very verbal. I love words, and I love to read and write. I love to read aloud. But something new clicked in me that day: I started to like math. I think I still love words more than numbers, but I do really enjoy numbers!

Once we were on a roll, Marilyn went the extra mile with me and continued to show me how numbers work together. She used new and different symbols I hadn't seen before. Soon, although it was abstract, I could follow her as she began to use letters instead of numbers, and use letters and numbers together. She started doing math by moving some letter/number combinations onto the other side of the equals sign. I started understanding more and more and before I knew it I was doing math with equations like:

That next year in school this really paid off. I excelled in all my math classes.

Today Marilyn lives in a different state, and we see each other infrequently. But to this day, Marilyn and I share a love of numbers -- and we also share a love of fundamentals. Getting back to the basics of things and picking them apart to really understand them; to really know the why behind the what.

I love that. I love being able to know why I do what I do, instead of just parroting things.

So thanks Mar, you thought you were just teaching your little brother some math -- but instead you've helped lay a foundation in my life that persists in supporting me to this day!

translated by Can Opener Boy at 16:30